Speculation on Abraham’s future was fueled further after the England international was completely snubbed in the line-up against Leicester on Saturday, May 15.

Many football fans found this odd especially because Abraham is Chelsea’s top scorer this season.

Instead, Tuchel started with Timo Werner upfront, with Kai Havertz and Olivier Giroud providing attacking variety on the bench.

Abraham was in attendance at Wembley but could only watch from the stands as he was not on the team sheet.

The England striker’s girlfriend Leah did not appreciate Tuchel’s team selection and she took to Instagram to blast the boss in a since-deleted post. She said:

“How on earth do you make the decision to leave your top goalscorer out of the squad for a final!? The same person who even scored the goals to actually qualify for this competition? “It’s not making any sense to me whatsoever. Not even the bench?! This has to be a joke.” 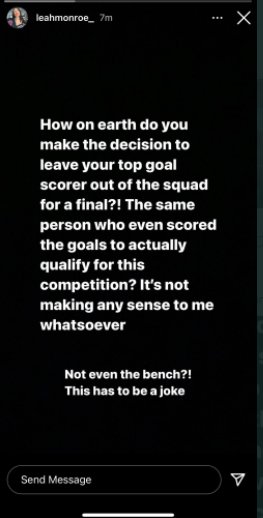 Chelsea went on to lose the FA Cup final, despite dominating Leicester, who got their winner in classic FA Cup style courtesy of Youri Tielemans.

The Belgian struck a beauty in the 63rd minute in a goal that proved to be the difference between the two sides in a hotly-contested final.

Mali players fight each other at Basketball World Cup

Mali players fight each other at Basketball World Cup

Pressure Mounts On Lordina Mahama, Mrs. Amissah-Arthur To Refund Over Ghc6M In Allowances Paid Them