Davido’s signee, Peruzzi, has revealed how one of the singer’s aide, Obama DMW died.

We earlier reported that Obama died on Tuesday after complaining breathing difficulties. He drove himself to the hospital for proper medical checkup and treatment but he didn’t survive.

Peruzzi, however, sent a private message to Sir J, explaining how Obama DMW died hours after they saw each other.

In the chat, Peruzzi said:

”I was with him this morning. He was eating rice in the studio cus we all gathered there to spend time with David before he left. Obama left me there at past 2am and I left there by past 3.

“Woke up and he was complaining of breathing difficulties. His arteries stopped pumping and he couldn’t breathe again. He walked into the hospital by himself!”

Further speaking, Peruzzi stated that he is done with smoking cigarettes and drinking alcohol because he feels thing like that could be linked to Obama’s death. 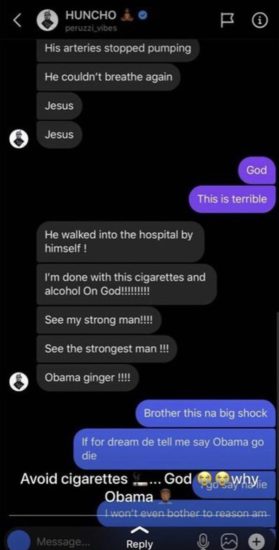 How onions can help you save money, time, and cooking gas

‘When you rush, you would crush’ – Sam George tells GRA over new approach to E-levy implementation