Big Brother Naija star, Gifty POwers launched an attack on entertainers over recent show off of their expensive cars.

It would be recalled that Davido got fans talking some days ago when he acquired a new Rolls Royce Cullinan worth millions of naira.

Popular Cameroonian-born singer Dencia also set the social media on fire some hours ago when she displayed her expensive fleet of cars, a move Gifty was not pleased with.

Gifty via a post on her timeline slammed the celebrities for exhibiting such behaviour.

According to her, they should stop pressurising their fans. She added that most of the cars are under credit.

Gifty noted that some of the top personalities showing off their whip could be Illuminati member as she does not trust them. 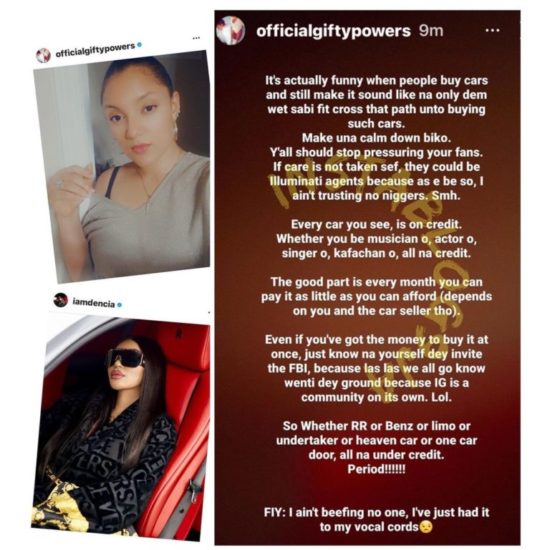 “In This Life Marry Well,” Singer Adekunle Gold Advises After Receiving A Gift From His...

I operated Railways Ministry for 6 months without office, adequate staff