According to the Corruption Perception Index, the world’s most trusted metric for assessing perceived levels of public sector corruption, its reports published between 2012 and 2020 show Ghana has not risen significantly in terms of perceptions of lower corruption.

Ghana’s president, Nana Akufo-Addo in a recent interview with CNN’s Zain Asher which has been published on YouTube, said since his party took over government, Ghana’s ranking in the world, in terms of corruption, has improved significantly.

In his own words, Ghana has “gone up several notches.”

Below is the transcript of his answer on the issue of corruption in Ghana.

Zain Asher: One of your most important mandates aside from fixing the economy is of course tackling corruption. Are you proud of the way your government has dealt with corruption and what specific steps have you made in trying to root it out?

Nana Akufo-Addo: The word proud or pride is not the word I would use. Am I satisfied that we’ve been effective? I will say yes. I will say yes. A lot has been done, and it is reflected in Ghana’s growing position on rankings of corruption in the world. We’ve gone up several notches since I came into office because we are dealing with these matters at the basic level.

For the anti-corruption institutions of our country, when I came into office, [they] were very poorly resourced. We can talk all we like about corruption and make all the wonderful statements but if the instruments at your disposal for dealing with it are weak and blunt, you will get no result.

We took this claim and subjected it to a test.

Across the world, the most reputable and widely referenced corruption ranking reports is Transparency International’s annual Corruption Perception Index (CPI).

The index ranks 180 countries and territories by their perceived levels of public sector corruption according to experts and businesspeople.

Although the index has been around since 1995, Ghana started featuring in the index in 1998 and was ranked number 55 out of the 85 countries featured that year.

The table below shows Ghana’s ranking since 1998 when she made her debut.

President Akufo-Addo who made the claim assumed office in January 2017. Saying that Ghana has gone up several notches since he assumed office means that Ghana’s ranking has significantly improved since the 2016 report which was released during the presidency of John Mahama.

Based on the available data, Ghana’s ranking on Transparency International’s Corruption Perception Index (CPI) since the Akufo-Addo government assumed office has been of ups and downs.

Transparency International’s other corruption indicator, the Global Corruption Barometer, in its latest document (2019) finds that 33% of people it interviewed were of the view that corruption had increased in the previous 12 months.

The same percentage of people also indicated that they had paid bribes in the last 12 months to access public service. 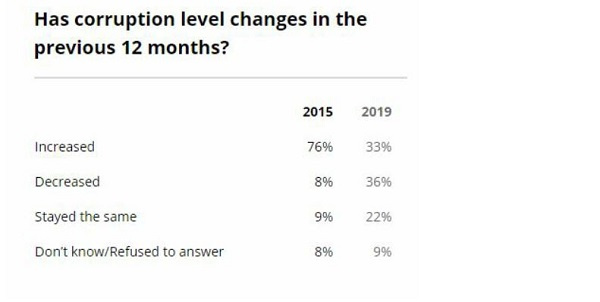 The previous report, published in 2015 found that 76% of people interviewed believed that corruption had increased in the previous 12 months while 36% had also indicated that they had paid bribes in the last 12 months to access public service.

Based on the available data from Transparency International’s Corruption Perception Index, it is untrue that Ghana’s ranking has improved or ‘gone up several notches’ since President Akufo-Addo assumed office in 2017.

Who Is Suge Knight’s Wife? » GhBase•com™

Why Akufo-Addo nominated me as a Deputy Minister-Designate – Wireko