Ablakwa Threatens To Initiate A ‘vote Of Censure’ On Ken Ofori-Atta.

Samuel Okudzeto Ablakwa has warned that the Minority will move a vote of censure to remove the finance minister from office.

According to him, unless Ken Ofori-Atta appears before the House to answer an urgent question demanding the cost of President Akufo-Addo’s recent travel to Europe which cost the country £15,000 per hour, there is nothing that will stop the minority from taking such a decision.

In a memo to the Chairman of the Business Committee of Parliament, Osei Kyei Mensah Bonsu, Ablakwa described Ofori-Atta’s delay in responding to the urgent question as offensive.

He said, “May I humbly serve notice that if the current contumelious hijack of Parliament by the Finance Minister is allowed to fester, a good number of my colleagues and I will not hesitate to exercise our mandate under Article 82(2)(b) of the 1992 Constitution to initiate a Vote of Censure on the Finance Minister.”

Okudzeto Ablakwa continued: “The entire Parliament of Ghana cannot be reduced to a puppet institution that works according to the dictates and the pleasure of the Finance Minister, Ken Ofori-Atta. In any case, what can be so complex about computing bills already paid?

The Business Committee of Parliament must not be seen to be condoning this unacceptable conduct of the Finance Minister, which ought to be seen as a grave affront to Parliament.”

Samuel Okudzeto Ablakwa had filed an urgent question demanding answers from Ken Ofori-Atta on the cost involved with the use of a private jet for President Akufo-Addo’s trips instead of the presidential jet.

The questions were admitted by the Speaker of Parliament, Alban Bagbin, and on June 1, 2021, the first part of the question which had to do with the airworthiness of the falcon jet, and was answered by the Minister for Defence, Dominic Nitiwul.

The second part of the question which involved cost and is to be answered by Ken Ofori-Atta is still pending because when the finance minister appeared before the house, he pleaded for more time to furnish the House on the cost of President Akufo-Addo’s recent trips.

Due to the minister’s plea, the question was subsequently taken off the Business Statement of Parliament, although the Minister had about two weeks earlier to prepare a response. 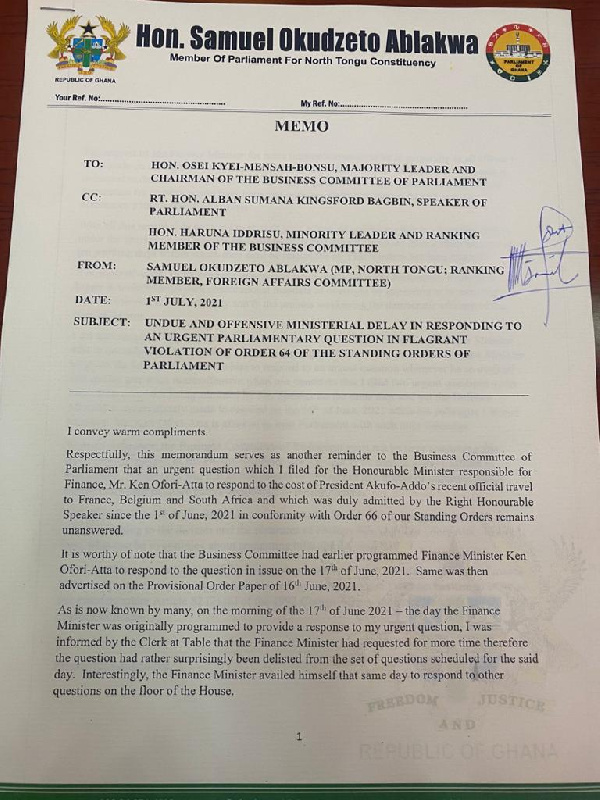 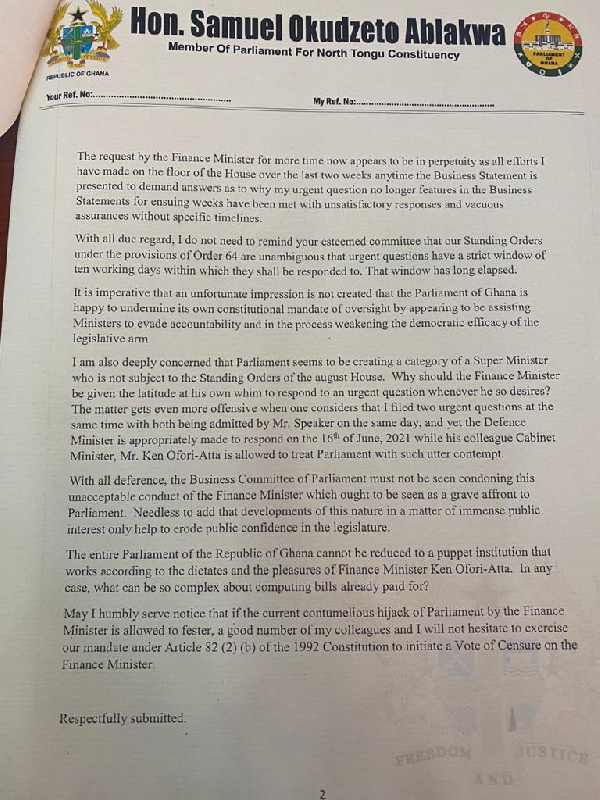 ‘I Will Defend Ghana’s T-Shirt’

How Tall Is He? Find Out Here » GhBase•com™

National Cathedral: God has not told me he is homeless – Sam Pee Yalley [Audio]

How Tall Is He? Find Out Here » GhBase•com™

National Cathedral: God has not told me he is homeless – Sam Pee Yalley [Audio]

How I got my nickname ‘General Mosquito’

Stranded Bride Cries By Road As Wedding Car Breaks Down